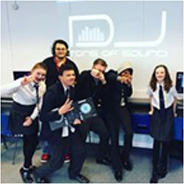 In 2015 we pilot tested a new school DJ project as there head of music wanted to introduce a new electronic based musical skill. Our team put our heads together and came up with a fully immersive course, which would fit in, to a school that included being fun as well as educational. We invested in new equipment for this project including 3 additional decks, laptops, speakers.

We had a variety of abilities join us at this project, some people who had never seen a pair of DJ decks before and we had one or two people who already had good experience of DJing.

To help the young people develop certain skills, we let them dictate and plan the final event. This included event planning and dedicated jobs with large responsibility e.g. leader, stage manager, designers, and decorators. This would help develop their leadership skills as well as their creativity and ability to solve problems. During the twelve weeks, we would save some time at the end of the session to develop their responsibilities. They took to those tasks very well and we had everything set up for the final event. It was decided to host the event in the dance studio at the school so we can use a smoke machine for better effects with the lights. Our first ever final event went down an absolute treat. The young people were excellent and arrived on time to set up, complete sound checks, and put on their final performance. They each put on a fifteen-minute set and set their mark to friends and family.

We will continue to work with the school and develop the workshops to their young people every.